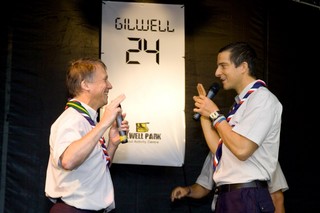 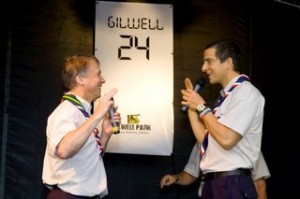 Bear Grylls officially became the Chief Scout of the United Kingdom on Saturday 11 July – cheered on by nearly 3,000 Explorer Scouts.

They tackled activities from climbing to zorbing while staying awake for 24 hours.

‘An extraordinary five years’
An explosion and purple and green pyrotechnics signalled the start of an emotionally charged handover that heralded in a new era for Scouting.

‘It’s been an extraordinary five years,’ Peter told the crowds after accepting the thanks of Mike Gooderson, Scouting’s Chairman. ‘When you start off in life, you don’t expect to be Chief Scout.’

He also reflected on some of the achievements during his time as Chief. ‘The Movement has grown. We have more Explorers and more volunteers. But it’s the little moments you remember. I was with a Group in Bristol with some disabled Scouts. Each one had someone looking after them and there was real passion and commitment there – that’s what Scouting is about.’ Peter also talked of the Jamboree as a highpoint, and Scouting’s impact around the world.

A promise of adventure
While the rain held off, Peter called for some hush before leading Bear through the Promise. Rather than just a handshake, the two exchanged a ‘bear hug’ in a great show of friendship, unity and continuity.

Bear struck a highly personal note in his acceptance speech: ‘My late dad said two things matter in life: follow your dreams and look after your friends. This is what I love about Scouting: ambition, dreams, and 24 hour madness! It’s about doing great things, loving and enjoying the great adventures and helping others to do the same.’

Looking ahead to his time as Chief, it was clear that Bear is not afraid to speak up for young people. ‘When people come up to me and say ‘Young people today . . .’ I say you don’t see what I see. I see 3,000 people full of fun, adventure and excitement. I’m so proud to wear B-P’s Silver Wolf, but more importantly, the scarf. Good luck and God speed.’

‘A great choice’
A shower of confetti ended the ceremony, but began the marathon of activities. ‘There are hardly any tents around Gilwell Park,’ Matt, 22, an Explorer Scout Leader pointed out, ‘because no one is planning to go to sleep!’

‘I think Bear is a great choice for Chief,’ said Allie, 16, an Explorer Scout from Middlesex. ‘He is very adventurous and focussed on the outdoors. I thought his stories were really good – he came across as very genuine and heartfelt.’

‘He’s bringing a fresh approach and real excitement,’ said Matt. ‘It’s great someone so well known has such a positive attitude towards young people.’

Bear spent time with the Scouts, and of course, couldn’t resist trying some of the activities for himself – scaling the climbing wall and spinning off in an inflatable zorb ball. ‘That was so much fun,’ he said, clambering out – I think Scouts should try and break the world record for zorbing!’